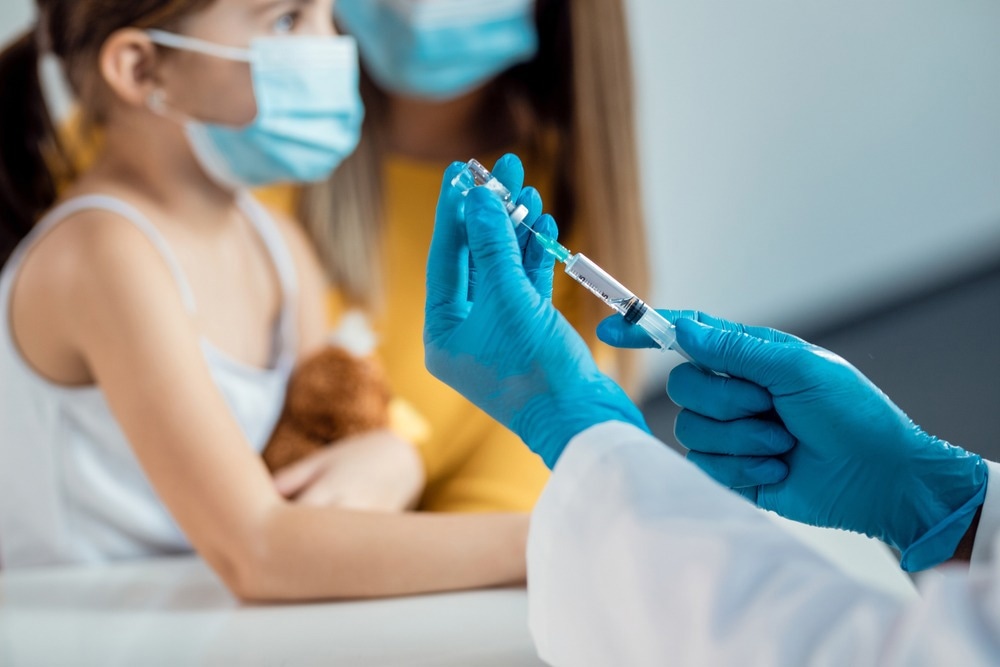 Vaccines are among some of the most effective preventative measures against infectious disease morbidity and mortality. Smallpox, for example, has been eradicated worldwide solely through a concerted global vaccination effort. Similarly, in many parts of the world, deadly diseases like poliomyelitis and measles are exceedingly rare.

However, an increasing number of conspiratorial claims regarding vaccines have undermined trust in vaccination efforts, particularly during the current coronavirus disease 2019 (COVID-19) pandemic.

A new Advances in Pediatrics paper examines notable risk factors related to this phenomenon, especially with regard to influenza and human papillomavirus vaccines. Importantly, claims against the severe acute respiratory syndrome coronavirus 2 (SARS-CoV-2) have been excluded from the review.

Children are under the care of their parents, which makes parental permission crucial for universal pediatric vaccination. However, the confidence of parents in vaccines is significantly impacted by the dissemination of myths regarding harmful vaccine outcomes.

These conspiracy theories are often supported by the fact that in many developed countries, vaccine-preventable diseases (VPDs) are extremely rare and thus account for a minor portion of total childhood morbidity and mortality.

The unfortunate consequence of these conspiracies is a growing sense of distrust in the efficacy and utility of these vaccines among parents. In fact, in the United States alone, up to one in seven young children do not receive their recommended vaccinations due to parental refusal alone, while more than 25% of American parents choose to delay vaccinating their children.

Children who are not vaccinated due to parental refusal remain at increased risk of acquiring VPDs which can subsequently contribute to outbreaks, as has been noted with measles and pertussis over the last several years.”

The current paper describes general vaccine hesitancy among the parents of eligible children, as well as some of the strategies that may be of use to counter this trend.

Vaccine hesitancy is defined by the World Health Organization (WHO), specifically by its Strategic Advisory Group of Experts (SAGE) on Immunizations, as a “delay in acceptance or refusal of vaccines despite availability of vaccination services.”

The vaccine attitudes of parents depend on the time, place, and vaccines in question. The WHO names three Cs in this regard: complacency, convenience, and confidence.

Both vaccine hesitancy and vaccine acceptance range across a spectrum from absolute refusal to take any vaccine to those who have their children take any recommended vaccine without asking any questions.

In a prior report, researchers describe five categories of vaccine hesitancy that include unquestioning acceptor, cautious acceptor, hesitant, late or selective vaccinator, and the refuser. These classifications provide specific counsel, as the underlying reasons for a parent’s vaccine hesitancy may vary with the decision-making paradigm and between the individuals themselves.

Moreover, some factors contributing to a parent’s feelings about vaccinating their children may include their age, sex, educational and income levels, religious and political convictions, as well as the specific vaccine.

Vaccines are refused by parents for their children due to fear of adverse effects, the perception that they are not really needed as a result of the currently low prevalence of VPDs, doubts regarding vaccine efficacy, individualistic thinking, moral concerns, and opinions for or against vaccines.

Many parents believe that vaccines cause, rather than prevent, illnesses. In fact, some posit that the immune system of a child can be weakened by giving too many vaccines, that alleged toxins are included in vaccines, and that the entire vaccination movement is fueled by unscrupulous manufacturers solely interested in their profit margins.

Over a third of parents believe that children receive too many different vaccines within the first two years of life, whereas over 90% believe that no more than three vaccines should be given on any given occasion.

There is a clear association between beliefs in alternative medicine, natural living, and vaccine hesitancy with parents who refuse to vaccinate their children. These parents, who are up to four times more likely to use alternative medicine systems, often think that acquiring the VPD would serve the child better than being vaccinated. Other areas in which such preferences manifest in this subset of parents include organic foods and alternative schooling approaches.

Similarly, despite a formal retraction of the influential 1998 article claiming a link between autism spectrum disorder and the measles, mumps, and rubella (MMR) vaccine, as well as the discrediting of the author, Andrew Wakefield, millions of parents continue to believe in such an association. These parents also claim that this association is not just due to the MMR vaccine, but vaccines in general.

An inherent flaw in assuming that providing information will correct erroneous beliefs is failing to recognize that people accept or reject information based on their ideologically-driven acceptance of the information source.

In particular, the pharmaceutical industry, with its documented interest in profits rather than on general utility in drug development, has largely lost credibility among the public. Its connections with the research, medical, and government communities are also considered a liability.

When people lose trust in their government, the results are feelings of oppression. These, in turn, may lead to conspiracy theories that ultimately contribute to the vaccine hesitancy of many parents.

The widespread nature of school vaccinations has also caused some insecure parents to view the recommendation to vaccinate their children as a form of social coercion. Subsequently, these parents have also magnified the side effects of these vaccines, rather than their benefits.

This has been found to be especially true of those who follow an intensive parenting style of living, as well as among those who listen to concerning vaccination information from family, friends, or books, rather than from their doctors.

Vaccine safety issues are predominantly highlighted in print, broadcast, social media, and on the Internet.”

Widespread needle phobia and the painful local reactions to vaccination also play a role in up to 10% of parental refusals, especially if they experienced painful childhood vaccinations themselves. This needs to be countered by reassurance, pressure on the injection site, the use of local anesthetics, and distracting the child during the vaccination process.

How to manage vaccine hesitancy

The best way to respond to vaccine hesitancy and refusal includes a range of tailored approaches, including personal meetings to offer educational information for those who accept vaccinations but want to practice a delayed schedule, for instance. This technique would not be effective if the refusal was based on religious beliefs, perceptions of vaccine-related dangers, or vaccine inutility.

Historically, social motives for vaccination have not been a significant factor in changing parental views on vaccines, especially in societies that prioritize individual freedom over community responsibilities.

A systematic review showed that while parents considered the concept of ‘‘vaccines being beneficial to others’’ to be important, their decision was ultimately based on the perceived benefit to their own child.”

Healthcare providers continue to play a major role as trusted sources of information. In fact, when physicians take the time to discuss vaccine concerns, as well as provide factual and authoritative rebuttals of wrong beliefs, at least a third of refusals are reported to be reversed.

The success of this approach is based on a relationship that builds trust and fosters shared decision-making regarding the child’s health. It is also dependent upon the clinician being unbiased about the risks associated with vaccines, while still presenting their benefits.

Up to 6% of pediatric medical professionals are themselves hesitant. In fact, recent medical graduates are 15% less likely to firmly believe in the benefits of vaccination. This necessitates a better grounding in vaccinology during medical training.

Medical providers are more effective when they share the evidence in a nonjudgmental/nonconfrontational way and acknowledge parents’ concerns with empathy.”

Thus, healthcare providers need to contrast the evidence-driven framework of their thinking with more anecdotal and emotional information that their patients encounter each day.

A connection between these paradigms is offered by “motivational interviewing,” which is practiced among vaccine proponents. This technique identifies the concerns and motivations of the parent without confrontation, thus allowing the parent to change their behavior without force from the other side.

Providers should continue to work at the clinical practice and advocacy level to approach vaccine hesitancy from multiple angles.”

Canceling Plans With A Friend? A New Study Says This Is The Best Way.
Vitamin K Shot At Birth: Importance, Safety And Side Effects
Is ‘Green Noise’ The Magical Solution To Better Sleep?
How To Clean Baby Toys: A Step-by-Step Guide
Baby Sign Language: 25 Signs, Ways To Teach, Benefits And Drawbacks
Ads by Amazon