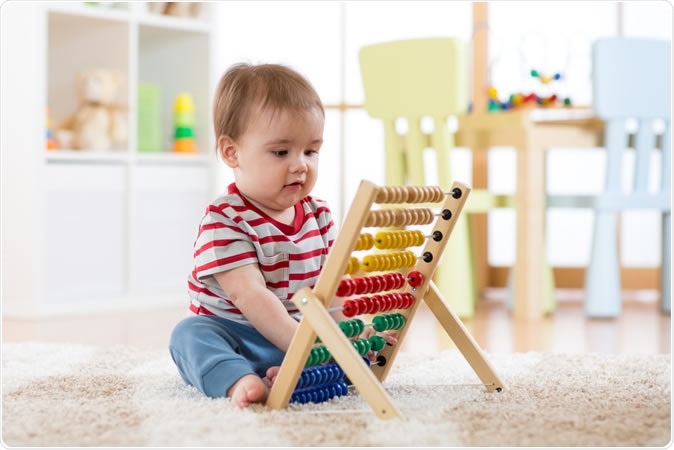 Infants and animals are able to understand approximate quantities of different types, in terms of relative proportions of the numbers of different sets of objects, provided the difference in numbers is large. This is represented by approximate number systems (ANS) in a rough way.

On the other hand, humans who have learned numbering can represent numbers by means of exact representations in the form of integers. Now a new study published in the journal Developmental Science shows that tiny tots less than 2 years old can actually relate counted quantities to approximate numbers. These toddlers expect a one-to-one correspondence with the counted total, when the counted objects are first hidden and then some removed.


Children do not understand the meanings of count words like “two” and “three” until the preschool years. But even before knowing the meanings of these individual words, might they recognize that counting is “about” the dimension of number? Image Credit: Ksana Kuzmina / Shutterstock

Integers are capable of showing small differences between the numbers of objects in different sets, but require that the individual learn to count numbers by name. Children were thought to begin this process, called linguistic counting, by around 2.5 years – reciting numbers up to 3. Over the next six months they learn the meaning of the number ‘one’, the same period for the number ‘two’, and then ‘three’ over another six months. Thus by about age 4 they realize that the numbers mean an exact count and that the last number counted is the cardinality of (or number of items in) that set.

However, there is a link between inexact and exact representations of numbers, as shown by the verbal estimates of the number of things in an unspecified array. In doing so, the individual is using an exact representation to describe an inexact number. In Western cultures, the earliest links between these two systems begins in the second year, with children being aware when counting is not done correctly, as by skipping around or by not following the right order. However, they are able to connect and use individual number terms to describe uncounted sets of objects only by age 4.

In the present paper, the researchers explored the idea that until this age infants have a partial idea that a number word means something to do with the count or quantity of a set of objects, though not the exact meaning. They used a search task to find out if infants 14-20 month old would be able to assess if objects hidden in a box had all been removed or any left behind, by assessing their search activity. Devising 5 separate experiments, they found that counting does help infants to represent an approximate array of objects numerically.

Prior research showed that infants 12-22 months looked for the remaining objects if 2 or less out of an array of up to 3 objects were removed in their sight. That is, they recognized that one or more was still hidden, depending on the quantity removed. On the other hand, with more than 3 objects, they were unable to assess the quantity removed; even if only 2 out of 4 objects were removed, they did not search the box for the remaining objects. In other words, they were using precise representations of individual objects, which is why they cannot go beyond 3, the limit of their working memory, in preference to imprecise approximations of number representations which can go to any upper limit.

The present study aimed to answer if counting objects before hiding them in the box would help infants switch to approximate number representations that can go beyond working memory limits. The researchers used a black box about 1.1 feet long, with a covered slit through which the babies could reach inside without seeing whether or how many objects were hidden in the box.

There were 4 of two different kinds of objects. In contrast to the earlier research, when 4 similar objects were counted before being hidden in the box, when the experimenter removed 2, the babies remembered more hidden objects and continued to search longer for the rest. They did not appear to remember exactly how many objects were counted, but used an approximate idea. This was not seen when 4 objects were hidden without counting first. This means that infants used the counting done by the experimenter to assess whether the ‘right’ quantity of objects had been removed.

To confirm the role of the ANS rather than of individual object counting in this increased ability to understand the difference in arrays of 4 objects when they were counted before being hidden, the experiment was carried out with either 2 or 3 of the 4 hidden objects being retrieved before measuring the period of searching. Babies searched longer when 2 were removed but not after 3, indicating they cannot differentiate between 3 and 4 by ANS – both are represented as equivalent in the babies’ minds. This indicates that ANS rather than integer counting is at work.

Experiment 3 tried to confirm this by using a larger number in each array, namely, 6 objects, which is well beyond the capacity of the working memory but can be represented by the ANS. In the first case, the babies should react to 6 as to 4, and in either case they should not search longer for hidden objects after 3 are removed. In the second case, they can distinguish between 4 and 6 in terms of ratio and thus should look longer for the remaining hidden objects if counting is first performed before removing 3 objects. The second case was shown to be true in this part of the experiment. Unlike experiment 2, in the case of the objects counted before being hidden, babies searched longer when 3 out of 6 objects were removed, but not when 3 of 4 were retrieved.

To confirm the role of the ANS and not working memory, the experimenters then looked at younger infants of 14 months, a group in which 6 hidden objects have never been represented successfully. Astonishingly, these young infants also searched longer after hearing 6 objects counted before being hidden in the box followed by removal of 3 or 4 of the objects. They were able to represent the approximate number of objects even without being able to count them, to a level (6) which cannot be explained by working memory.

A final experiment used proper names rather than count names, to rule out the possibility that the babies might be differentiating and thus remembering the objects by means of the count names rather than by a rough numerical approximation. However, this showed that searching was longer only when 1 object remained out of 2 hidden objects, but not when 2 remained out of 4. Thus a labeling effect was not a contributor to the successful approximation of the number of objects seen after counting in the earlier experiments.

This study therefore shows the earliest link ever observed between ANS and integer counting. Researcher Jenny Wang says, “When we counted the toys for the babies before we hid them, the babies were much better at remembering how many toys there were.” Thus when an infant between 1 and 2 years observes objects being counted, this may attract the attention to the concept of numeric measurement, or the use of numbers to represent the quantity of objects. This can occur a long time before the meaning of count words themselves is understood.

The ability to notice that counting refers to the number rather than the names of objects might be due to early experience of observing counting by others. Counting may thus help in the development of number representations in infants at an earlier stage than ever thought before. And count names are not confused with proper names or labels. Thus even young infants have an advanced understanding of what the world around them is like, and what the various words people use around them actually mean. Later research may show how this is associated with later number skills.

Study examines effects of sexually objectifying song lyrics on adolescent sexting behavior
COVID-19 impact on young people’s mental health could result in increased demand for support services
The Funniest Tweets From Parents This Week (Nov. 19-25)
Twitter May Be A Hopeless Place, But These People Found Their Spouses On It
Study finds that pediatric stroke is associated with COVID-19 infections but not with multisystem inflammatory syndrome
Ads by Amazon