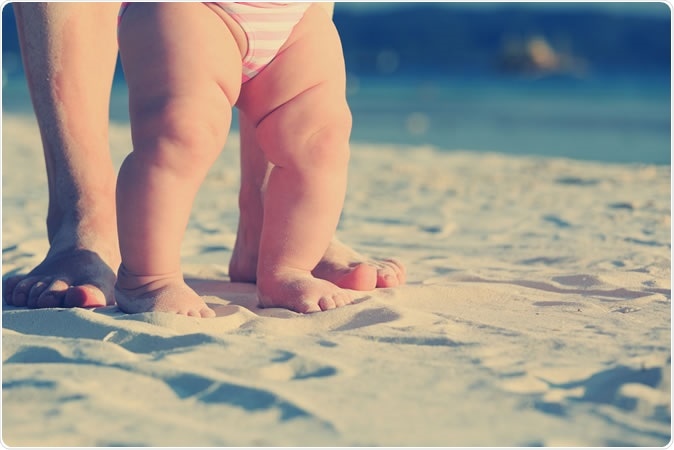 A new study shows that babies who weigh more at any gestational age have a higher risk of later developing food allergies or eczema in childhood. However, there was no increase in the risk of hay fever. The paper published in the Journal of Allergy and Clinical Immunology found that the risk of food allergy went up by 44% and of eczema by 17% for each kilogram of added weight. On the other hand, restricted growth in the womb appears to be protective.

The study and its findings

The researchers looked at almost 2.1 people with eczema and 70,000 with food allergies of various types, as well as 100,000 people with hay fever. All these are allergic conditions – eczema also being known as allergic dermatitis and hay fever as allergic rhinitis. The data came from over 15,000 studies, mostly in Europe. However, such allergies, as well as asthma and anaphylaxis, are found in 30% and 40% of the global population.

They looked at whether the weight of the baby at birth was linked to the risk of future childhood allergies, even after correcting the weight for the period of gestation at which the baby was born. They found a significant rise in risk, which was not found with babies who were abnormally small at birth for their gestational age. Such children thus seemed to have an immune system primed to resist allergic responses, but severe growth restriction is associated with a higher risk of other diseases later in life, some congenital and some acquired.

The findings are in agreement with prior research that shows an increased risk of emergency visits for asthma in newborns who have a high birth weight, compared to those with a normal range of weight. Beyond 4.5 kg (the upper limit of normal birth weight), each 100 g increase in weight caused a 10% increase in the risk of an emergency visit for asthma. The older study also pointed to low-income status, male sex and aboriginal origin as risk factors.

Various mechanisms that may operate to increase the asthma risk in children include the worsening of lung function as a result of reduced rate of airflow with expiration, as well as an increased tendency of the small lung airways to close down when the pressure inside them drops during expiration. Respiratory muscle action is also weaker in these children.

Obesity also increases the generalized state of inflammation, and may release molecules which cause airway inflammation. Fat cells may also cause mast cell activation which is directly linked to spasm of the airway smooth muscle.

Researcher Kathy Gatford says, “You don’t necessarily grow out of childhood allergies, sometimes you do and sometimes you don’t. Things like an egg allergy a lot of kids will grow out of, whereas peanut allergies are much more likely to persist.” She says it is possible that some persistent allergies that are seen even in adults might not be detected because of the paucity of research in this field.

Gatford sums up: “It is increasingly clear that genetics alone do not explain risks of developing allergies, and that environmental exposures before and around birth can program individuals to increased or decreased risk of allergies.” As a result, she says, mothers of big babies should find out how to change the conditions in their homes to protect their children against allergies. The answer does not lie in ensuring growth-restricted babies, but in understanding how this condition contributes to allergy protection.

Most of the studies reviewed were carried out in young children. The researchers point to the need to carry on these investigations in older age groups, such as older children, teenagers and adults, to understand how and when reduced birth weight operates to improve the person’s immunity and reduce the tendency to develop allergies. They also want to find out if this relationship tapers off after a few years or remains active over time.

Study finds that pediatric stroke is associated with COVID-19 infections but not with multisystem inflammatory syndrome
Maternal obesity during pregnancy causes metabolic perturbations in offspring’s liver and skeletal muscle
Parental methods to help toddlers sleep are related to the development of a child’s temperament
COVID-19 impact on young people’s mental health could result in increased demand for support services
The Funniest Tweets From Parents This Week (Nov. 19-25)
Ads by Amazon