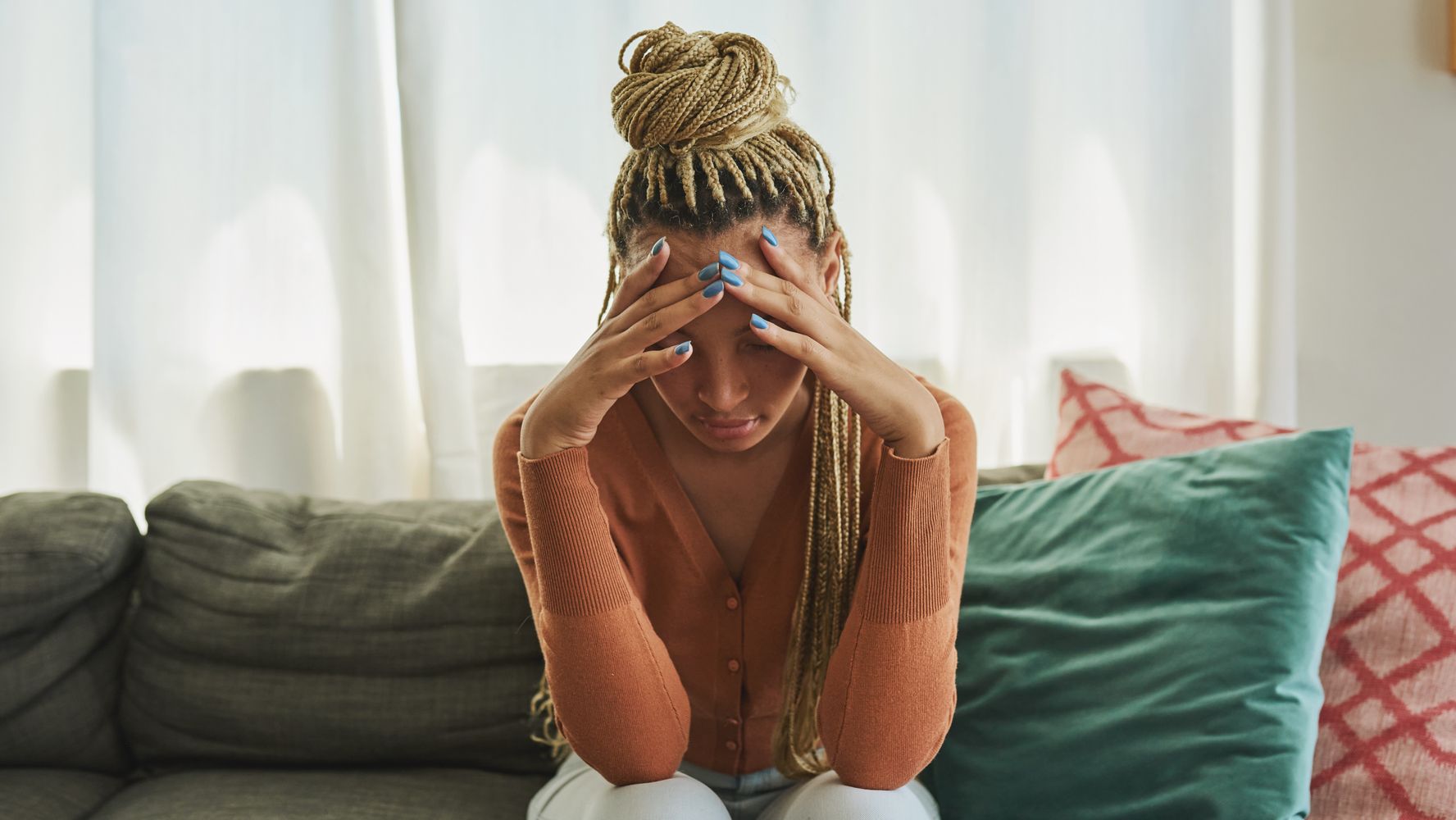 Much of combating mental health stigma involves drowning it out — talking so openly and loudly about what you’re going through that your voice overpowers the one in your head telling you to “suck it up” or “fake it till you make it,” or encouraging the people in your life to do the same.

As a result, many of us have gotten into the habit of sprinkling clinical terminology into our casual conversations as a way of relating to and connecting with each other emotionally. But when we use mental health and trauma language too casually (or, worse, inaccurately), we water down its impact, ultimately strengthening mental health stigma instead of neutralizing it.

More obvious conversational faux pas to nix include saying things like you’re “so OCD” just because you organize your socks by color, or using “bipolar” as an adjective to describe something as erratic. (Think: “The weather’s so bipolar today.”).

“In everyday language, being ‘triggered’ tends to mean having a strong negative reaction in response to an event or situation, like feeling angry or upset — but this isn’t how psychologists think about the term,” Anton Shcherbakov, a New Jersey-based licensed clinical psychologist, told HuffPost. “Like all language, it’s getting diluted and misused now that it’s popular.”

If we learn to use the term correctly, however, we can start collectively tearing down one of the biggest barriers to stronger bonds: misunderstanding.

“We make what psychologists call the fundamental attribution error, or the tendency to attribute negative actions by others to their character, rather than to circumstances,” Shcherbakov said. “When someone is open about their triggers, it can help us understand them better and have more empathy, which is one of the best ways to strengthen relationships and communities.”

To build this strength, experts recommend a crash course on triggers versus strong feelings so you can express yourself accordingly.

The term “triggered” was originally part of the trauma framework for understanding symptoms of post-traumatic stress disorder, like flashbacks, rage dissociation and other intense or extreme reactions to seemingly benign events happening in the present.

A better-known example of this is the war veteran who becomes panicked and ready to fight after hearing a car backfire.

“Being triggered in this sense literally means something in the present has triggered a past traumatic memory that’s led the body’s fight-flight-freeze system to take over,” Noël Hunter, director of MindClear Integrative Psychotherapy in New York, told HuffPost. “The person is no longer fully in the present, but rather, their mind is back in the trauma.”

It feels completely out of the person’s control, Hunter added, and they often struggle to function during these episodes.

In modern psychology, experts also apply the concept of triggers to other mental health conditions, such as addictions and eating disorders. “The idea here is that certain triggers (seeing someone light a cigarette) may then increase your likelihood of engaging in behaviors you’re trying to change or avoid (smoking),” Shcherbakov said.

How Being Triggered Differs From Having A Strong Feeling Or Reaction

Differentiating between being triggered and having strong feelings can be confusing. Not only are there many parallels between the two emotional states, but the experience of each varies for everyone. There are a few subtle differences that can help clarify what you’re actually experiencing.

“When someone is triggered, it means they’re experiencing a strong negative emotional or physical reaction to a stimulus,” Meghan Marcum, chief psychologist for AMFM Healthcare in California, told HuffPost. “It can involve a response from any of our five senses.”

If someone was abused when they were young, they might not recall all that much about the person who abused them. Many years later, a whiff of that person’s cologne could cause a flood of unpleasant memories and emotions to resurface and trigger a panic attack or cause the person to dissociate.

Someone who’s in early recovery from alcohol and attends an event where they didn’t expect alcohol to be served might also find themselves triggered — say, by the bartender or liquor bottles — and become consumed by feelings of fear or anger (cue shallow breathing and agitation).

Triggers reactivate painful, traumatic memories or cravings for unhealthy and self-destructive behaviors you’re trying to change, whereas strong feelings are mostly uncomfortable or upsetting in relation to the moment that precipitated them.

If someone comments on your weight or appearance, it can lead to a negative emotional response in the moment, like feeling insulted or betrayed. Yet these feelings, while terrible, may be present-centric and not rooted in past trauma or behaviors linked to a mental health disorder.

But for someone with an eating disorder, those same comments could set off a cascade of painful memories and distorted beliefs that make them feel like their past trauma has reemerged, and can lead to a relapse.

Triggers don’t exist on a sliding scale like feelings do.

As the term was originally intended, being triggered is an all-or-nothing phenomenon.

“A person might be able to maintain some awareness of present-day reality and not be fully immersed in a flashback, but they’re still triggered,” Hunter said. “You either are or you aren’t.”

Triggers can be more or less powerful and result in more or less intense reactions, which can exist along an infinite continuum, but something is either a trigger for you or it’s not.

Feelings, on the other hand, can be influenced by any number of factors.

Back to those comments about your appearance: If you’re enjoying a chill day off, you might react with a brilliant clapback and move on, whereas, after a brutal day at work, you may be more likely to get angry. (Constant comments about your appearance, however, or another type of stressor that’s specific and ongoing in nature, can fester in your mind and morph into a trigger over time.)

Triggers can get in the way of your day-to-day functioning.

Because triggers are so personal, there’s no one-size-fits-all way to distinguish a trigger from strong feelings — still, when a thought, action or feeling stops us from living our best life or gets in the way of our day-to-day functioning, professional help can help you gain a better perspective.

“If someone has a reaction that’s far and above other typical reactions, it’s worth investigating,” Marlene McDermott, vice president of quality and therapy services for Array Behavioral Care, a telepsychiatry practice, told HuffPost. “Avoidance, extreme fear or reactivity and nightmares are all examples of topics to discuss in treatment to investigate a trauma response versus a fear response.”

Signs You’re Using the Term “Triggered” In A Disrespectful Way

Even though the term “triggered” has come to be understood synonymously with strong and unpleasant emotions (which, technically, is one way of describing how people respond to a triggering event), that doesn’t mean we shouldn’t be more mindful of how we integrate it into our day-to-day convos.

“One way I often hear the term used disrespectfully is when someone says, ‘Wow, you got so triggered there,’” Shcherbakov said. “Not only does this invalidate the triggered person’s experience, but it tells them they’re acting inappropriately, which is hurtful and ultimately unhelpful.” (Not to mention, untrue.)

The triggered person usually knows they’re having a strong reaction that’s out of proportion to the present moment and may be embarrassed about it — callous commentaries do nothing but further stigmatize and trap them in their trauma.

Similarly, when you tell someone they triggered you or that a situation was so triggering, you may be inadvertently minimizing the experience of someone with a mental disorder.

“Being upset your friend is late because that’s a pet peeve isn’t the same as seeing a reminder of your trauma that causes intense fear and anxiety,” Shcherbakov said.

How To Cope With Being Triggered

There are a lot of ways to cope with being triggered, and their effectiveness will vary from person to person, Shcherbakov said, but there are three strategies that tend to work for a lot of people.

“When your fight-flight-freeze system is activated and you start to have a flashback or panic, this strategy can help you reconnect with the present moment and reduce your level of activation,” Shcherbakov said. “The simplest way to do this is to practice tuning in to the five senses.”

Similar to grounding, muscle relaxation allows you to reduce the level of muscle tension that can accompany being triggered.

Try it: “Begin by squeezing your fists for three seconds, then releasing,” Shcherbakov said. “Repeat the squeeze for another three seconds and release again.” Move through all of the major muscle groups in your body one by one, with two sets of three seconds of tension — biceps, shoulders, face, abdomen, legs and feet (squeeze into a ball).

Talking to a friend or family member can be helpful in reducing your level of activation and stress response, even if you don’t talk about what triggered you.

Try it: Once you notice symptoms of being triggered (racing heart, heavy breathing, racing thoughts, feeling frozen), get in touch with someone who makes you feel at ease.

Irrational thoughts pay no mind to logic, so there’s no point in trying to negotiate with them — the only thing you can do is accept their presence and distract yourself until they subside, McDermott said.

How To Be There For Someone Who’s Triggered

“Usually, when someone is triggered, their reactions or behaviors appear to not be associated with the reality of the present,” Hunter said. “They might not seem to be looking at or talking to you — they might even scream, run, freeze, attack or hide, while you’re wondering what just happened.”

The best thing you can do is not react or shame them during such an episode. Ensure you’re there to support them and do what they’ve told you is helpful to them — whether that’s distracting them, removing them from the situation or making them laugh.

If they haven’t shared their triggers or go-to coping mechanisms with you, “you can try and orient them back to the present moment, but this becomes more about having a mutual understanding,” Hunter said. “In some cases, the best help is to do nothing at all.”