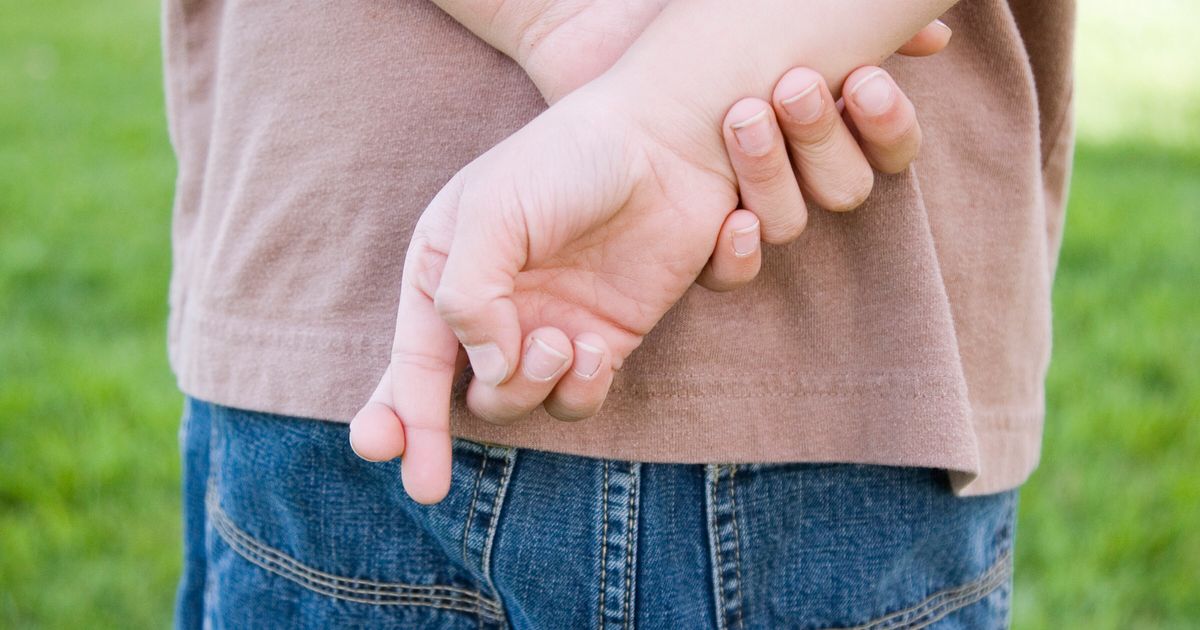 One of the delights of talking with a young child is that they will tell you anything that pops into their mind, completely unfiltered — be it a frank assessment of someone’s personality, or a piece of sensitive information it never occurred to them to hold in secret.

Children wear their hearts on their sleeves and inspire unconditional trust, so it’s jarring when your innocent little one utters something patently untrue.

Do they understand that they are lying? Did something happen that shifted their reality? Are they on their way to becoming a sociopath, or a salesperson?

How you react to your child’s untruthfulness will depend on their age and the circumstances. Kids don’t lie for no reason, and if you can figure out what’s driving them, it can be an opportunity to teach them important life skills.

At what age are kids aware that they are not telling the truth?

Throughout their infant, toddler and preschool years, children also don’t know that their perspective is unique, that other people have separate thoughts and feelings. They develop this skill, known as theory of mind, around ages 4-5. Until they understand that others may not know the same things they know — for example, who took the last cookie — they aren’t really capable of lying.

Once they are able to grasp this idea of competing perspectives, they become capable of understanding lies, as well as sarcasm and figurative language.

“For kids that are more developmentally mature, 5, 6ish, certainly, for most kids by 7, 8, they understand not telling the truth,” said Cindy Graham, a Maryland-based psychologist who works with children, teens and parents.

While lying is generally a negative thing, the fact that kids are capable of lying shows that their thought process is maturing.

“We want kids to have that awareness of, ‘Oh, I may get in trouble if I admit to this.’ It’s a recognition that there’s a negative outcome that may happen for me here,” said Graham.

Although we don’t necessarily want children to lie, Graham said, “those particular skills are really important for navigating adulthood.” It would be concerning if a child never lied under any circumstances.

“I don’t know of a single person whose kids haven’t lied,” she added.

Why do kids lie?

Once kids are capable of understanding what a lie is, “a lot of the lying is more based on avoiding punishment, and avoiding pain,” said Lockhart.

A child may be more likely to concoct a lie in order to avoid punishment that they view as particularly harsh. So parents who think they are preventing secretive behavior with big threats may inadvertently be encouraging further lying in the hopes of avoiding such punishment.

Of course, some lies are dangerous and do merit serious consequences — but the punishment doesn’t need to be harsh simply for saying something untrue.

Kids and teens also have a need to test boundaries. They will want to press against limits and see how far they can stretch them. This kind of lying doesn’t need to be tolerated, but it also shouldn’t be unexpected from a parent’s point of view.

If a lie is successful, kids may feel emboldened to try again. When lies are repeated in this way, “they’re not necessarily doing it compulsively,” said Graham. Their behavior isn’t good, but it makes sense on a certain level.

“They’re not doing it to get at you — that is one of the things that parents often struggle with,” said Graham.

A flood of emotion can also trigger lying. “Kids might have the cognitive capacity to understand they’re lying when they are regulated. But when they’re dysregulated … if they’re afraid they’re going to get in trouble, or they’re afraid that someone might be mad at them, they will do anything to preserve that sense of safety,” said Sarah Bren, a psychologist who works with parents in New York.

In this kind of a situation, she explained, “That’s not, ‘I know I’m lying, but I’m going to do it anyway.’ That’s, ‘I’m not thinking about the fact that I’m lying. I’m impulsively saying this thing to try to make myself feel safe again.’”

There are times, however, when lying can be a sign of a bigger problem.

“For some kids, especially teenagers, it could be indicative of a mental health issue, if it is a consistent pattern of lying,” said Graham.

But in most cases, lying is a normal, expected part of kids’ development.

“A lot of lying is more based on avoiding punishment and avoiding pain,” said Lockhart.

When should parents call kids out on lying, and how?

Even when it’s obvious that your child is lying — when the crayon scribbles are, literally, on the wall, and they’re saying it wasn’t them — confronting them immediately isn’t always the best idea.

Kids are likely anxious if they know you’re suspicious of what they’re saying, and they probably won’t fess up if you challenge them in public, especially if they’re around their peers.

“Reducing that defensiveness, reducing their fear of a negative outcome is an important way to approach it,” said Graham.

“Sometimes we gotta go underneath the lie and get in and help them to feel safe with us,” said Bren. Rather than making the accusation, “You’re lying!” a parent could say, “Hey, I think you want me to believe that that’s the truth.”

Coming in like a TV lawyer and asking leading questions in an attempt to trap them in their lie won’t establish the trust or safety needed for them to speak with you openly.

Bren suggested letting kids know, “I’m not going to be mad at you if you tell me the truth. We’ll figure this out together.”

If they’re lying about completing homework, maybe the homework is too hard, and they need help. If they’re lying about their whereabouts, or who they’re with, ask yourself, why do they feel the need to keep this information from you? If they’re engaged in a dangerous behavior, your response will be very different than if they’re simply testing limits.

“Occasional lying is normal, but when it’s an issue, it’s because they’re missing some skills that need to be developed,” said Lockhart, adding that kids may need help with judgment, decision-making or problem-solving.

“Coaching them through the problem-solving that put them in a bind where that lie felt like their only choice” builds skills that “will reduce lying over time,” Bren said.

Graham suggested choosing a “neutral time” to talk to them, not the heat of the moment. Pick a time and place where they can feel safe opening up about why they lied.

Starting off with “lying is bad” won’t help your child feel safe to speak openly with you. In a separate conversation after the fact, you can talk to them about how lying erodes trust and damages relationships. We do want to teach kids that lying causes problems, but this will likely come after working through our child’s particular lie.

If they’ve lied because they feel vulnerable, accusing them of lying or lecturing them about it will make them feel “more vulnerable, more dysregulated, flooded with a feeling of shame, which turns off the prefrontal cortex, it makes it very hard to learn new strategies,” explained Bren.

You want to be emotionally neutral. Storming through the door after parent-teacher conferences and yelling, “Why have you been lying to me about doing your homework?” is going to make a child feel unsafe and act defensively.

But if you wait until you have had a chance to cool off and really consider where this particular lie is coming from, you can knock on their bedroom door and say, “I hear that you haven’t been handing in your homework at school. You’ve been telling me that you’re doing it every day. What’s going on?” you increase the likelihood that they will open up, and then you can problem-solve together.

For an older child, Bren says you might want to ask, “What was going on for you that you felt you couldn’t tell me that?”

Lockhart suggested using language that will help them build up the missing skills that may have led them to lie in the first place. If you think they may have copied an assignment, for example, you might say, “I noticed that you told me that you finished your homework, and didn’t need any help. … I’m just having a hard time understanding how you finished it so quickly.”

You could then lead your child to reason why copying an assignment isn’t a good strategy, as they still won’t understand the material, and offer to help them redo the assignment honestly. In this scenario, the “punishment” is doing the work over again — no additional punishment for lying is necessary.

In this example, “the lesson that needed to be learned is that you can be honest with me, and then I will support you when things are hard,” said Lockhart. We don’t want a child to conclude, “I’m going to lie more to avoid the pain because she’s going to freak out over it.”

“The goal here is to get your kid to talk to you about things,” added Lockhart. You don’t want to add punishments that will prevent them from feeling comfortable coming to you.

“We have to decide at this moment, what is my bigger goal?” said Bren. “Do I want to make my kid feel bad that they’re lying, because I’m mad at them for lying to me? … Or is my goal to help my child not to lie in life?”

We may have to put our own anger aside and ask, “Do I want to have a battle over this lie? Or do I want to build skills to not lie?” she said.

Sometimes, Bren added, this may involve pushing past our own fears, such as: “My kid is going to be a liar. My kid doesn’t have any respect, my kid isn’t going to have any friends. If they keep lying, everyone’s going to judge me.”

In some cases, a child might not be comfortable talking to you or another parent, and you may need to find a school counselor or a therapist whom they do feel they can be open with. Try not to take this personally. Remember that it’s more important for them to be able to talk through things with someone than it is for you to know every detail.

“Generally speaking, kids are not doing this to be manipulative or to be hurtful, to get over on their parents or anything like that. It really is coming from a place of fear. And that’s what you really want to get to the bottom of and to help them through,” said Graham.

40 Hilarious Tweets About The Lies Parents Tell Their Kids

21 Thoughtful, Funny Questions You Should Ask Your Kids

Financial coaching for parents in pediatric primary care reduces missed well-child care visit rates
The Funniest Tweets From Parents This Week (Jan. 28-Feb. 3)
Canceling Plans With A Friend? A New Study Says This Is The Best Way.
55 Sensory Activities For A One-Year-Old
What To Do When Your Kid Says They Hate School
Ads by Amazon